Once again winter is back in Boston. I've started to play in the T with a new suitcase version of the Professor World Band. It's still in the developmental stages but I've been having a lot of success with it and making lots of people smile. I'm going to road test it this February and fly with it to Guatemala for a month. Last time I was there was in February of 1980! Coming up on 35 years ago!
I have some great stories to tell about that trip. I was hitching across from Belise to Mexico because I ran out of money. I started busking with my mandolin to make some money for food and lodging. I was quite an attraction as a light skinned redhead with long hair and a beard in a beat up old cowboy hat. I had big crowds of people who gathered as I belted out Beatle songs that everybody knows. I earned enough to stay in cheap hostels and food was very inexpensive. I made an effort to learn Spanish and carried my dictionary and vocabulary notebook with me everywhere. After a month or so I could have some interesting conversations with people. I still remember playing in Antigua on the crafts market and I look forward to playing there once again on this coming trip. Not for the money this time but just for old times sake and spread the message of the Professor World Band.
The police used to stand around and watch sometimes with big submachine guns and very macho looking scowls on their faces. They never really bothered me but they did make me a little nervous. I kept thinking better not hit any sour notes or it could be your last!  My friend Ricardo who lives with me in the coop is a street musician from Guatemala. He tells me that it is legal there now. I do remember eventually getting stopped from playing in Guatemala city and told to go back home because I didn't have any money. I hitched on up through Mexico back to Austin Texas where I was living in a coop.  What an amazing trip that was! My guardian angels must have been looking after me to make sure that I was safe.
I remember Guatemala as a beautiful country . I know that times are pretty tough for many people there and there is crime and poverty. I will be careful but I also hope to arrange to play in schools while I'm there. Where there is joy there is hope and that's what it's all about. That, and not to mention getting away from the cold Boston winter.
So I hope my next update will be about the wonderful time I had with the Professor World Band in Guatemala and hopefully I will be able to post some photos of us performing at the market in Antigua and also at a school or two. here are a couple of pictures of the new suitcase version of the Peace Wave Generator that he took in South Station last week. Thanks to Nda-jiya Suberu for sending these. 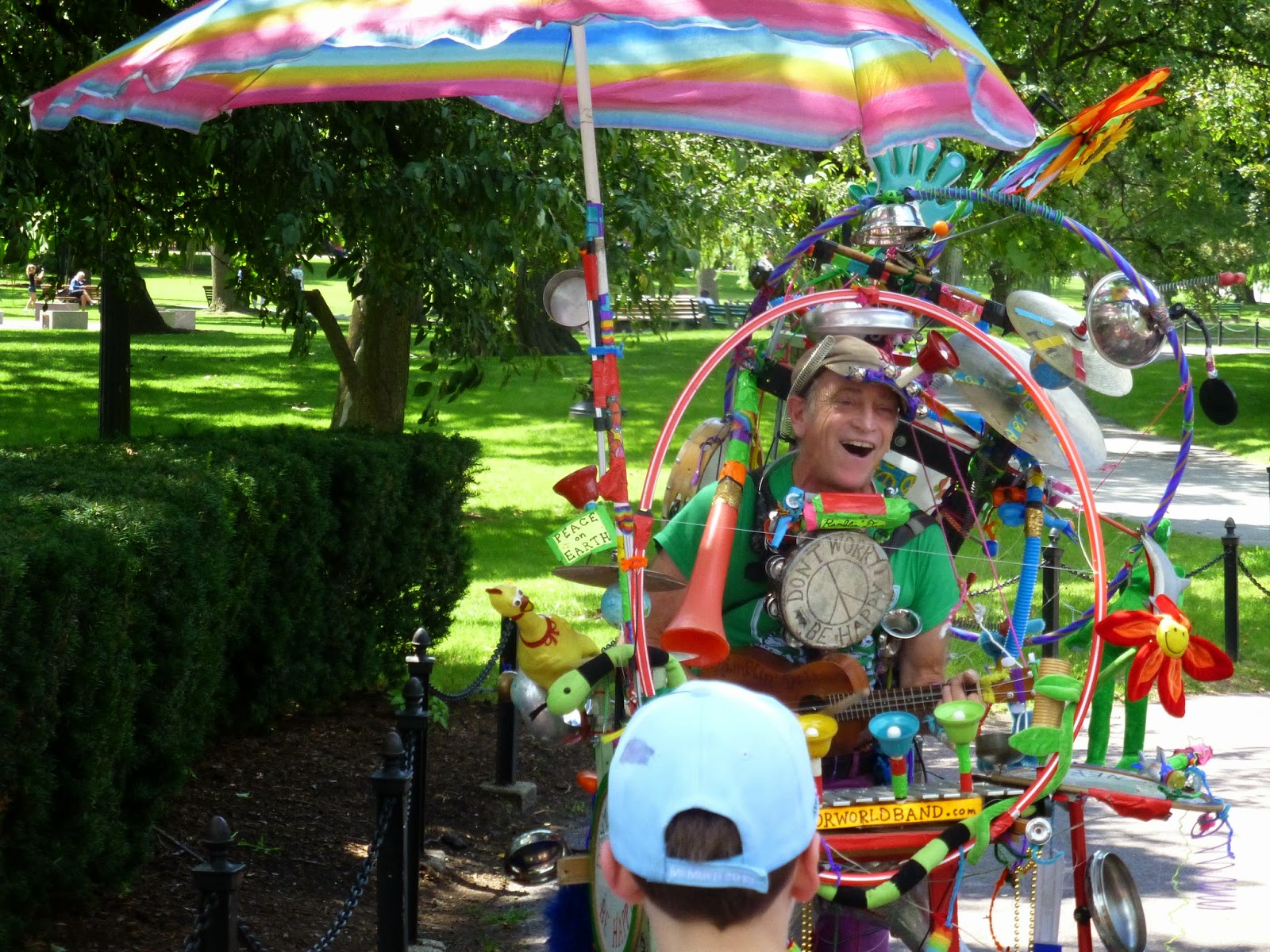 This recent photo, taken Saturday, July 22 in the Public Gardens, was sent to me by Chris Collett. As you can see, the mustache is gone! Please keep sending photos. Thanks again to Chris!
Posted by Professor World Band at 11:44 AM 14 comments

Greetings to all who read this blog. I thought it important that I should honor the recent passing of my dog Olly by remembering him here. I got him from a Swiss farmer near Bern in the summer of 2000.  He was an Appenzeller, specially bred to herd cows. He was also a show dog and from an early age really enjoyed being the star of my show. I spent a lot of time training him and he quickly mastered all kinds of tricks and even learned how to solve complicated math problems by barking out the answers. He had a passion for riding skateboard and although he never really quite mastered it, he never tired of trying, to everyone's amusement. He loved just about everyone but especially kids and often performed in many of the schools that I played in. He made a lot of people smile; especially me. I will never forget him! Rest in Peace Olly! 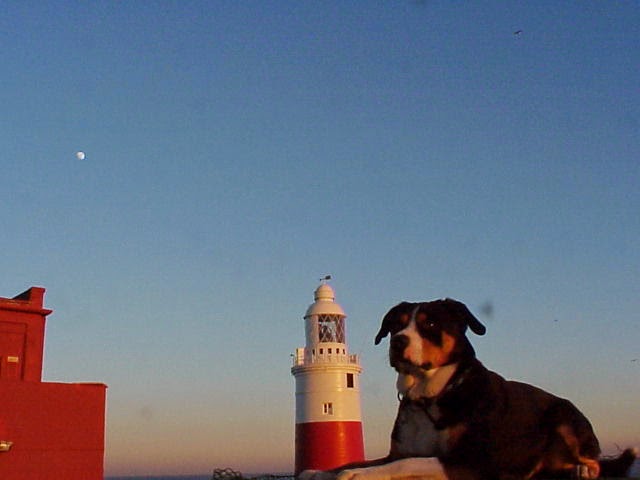 That's Olly sitting on the roof of my truck near he Straights of Gibraltar , December 27, 2001.

The show goes on as the weather slowly warms up here in Boston. I still play in the T on rainy days occasionally but I'm looking forward to playing more outdoors again. My favorite place to perform around here is still on the weekends in the Boston Public Gardens.
Unfortunately I noticed they recently chopped down my favorite shade tree on the spot where I always play there. Once it starts getting hot again it will be too sunny for me there so I'll have to find a new shady spot. What a shame though. That was really a beautiful tree and the best spot in the whole park to play.

I've been still developing my new traveling version of the Professor World Band. Inevitably it grows larger as I add more cool stuff to it. I want to keep it small enough to fit into a suitcase for easier travel. I've been mostly playing in the T with it where the acoustics can be quite good….when there is no train passing through. It sounds great there where you can hear it well.
On noisy streets, like in Harvard Square, it barely cuts through commotion of all the traffic so it's a bit more difficult . Fortunately most streets aren't quite so noisy.
Harvard square hasn't been the most pleasant place to play for me lately anyhow. Too often I get bothered there by drunks and druggies who can disrupt the show. So it goes. It's not always easy being a street performer but I love it and the show goes on and grows and generates more and more laughter and peace waves. Times have been hard for lots of street performers lately so you really have to love and believe in what you are doing. I've been pretty lucky so far!
I could use an occasional gig to help things along though. I'd especially like to do more in schools but all kinds of events can be lots more fun with an appearance of the Professor World Band. Keep that in mind and feel feel free to pass on my information to anyone who might be in need of a really unique and fun musical show.
Thanks for all the donations, compliments and support I've been getting, both on the street and by email. I recently heard from someone that I met while playing in Verazdin in the Chech Republic about 25 years ago who looked me up online. It's nice to be still remembered after so many years. Don't forget to send me photos either if you've got any good ones.
And always feel free to come and join the band. I'm us usually still posting my whereabouts on Twitter at ProfWorldBand when I know I'll be playing somewhere for a while.


Posted by Professor World Band at 11:55 AM 6 comments 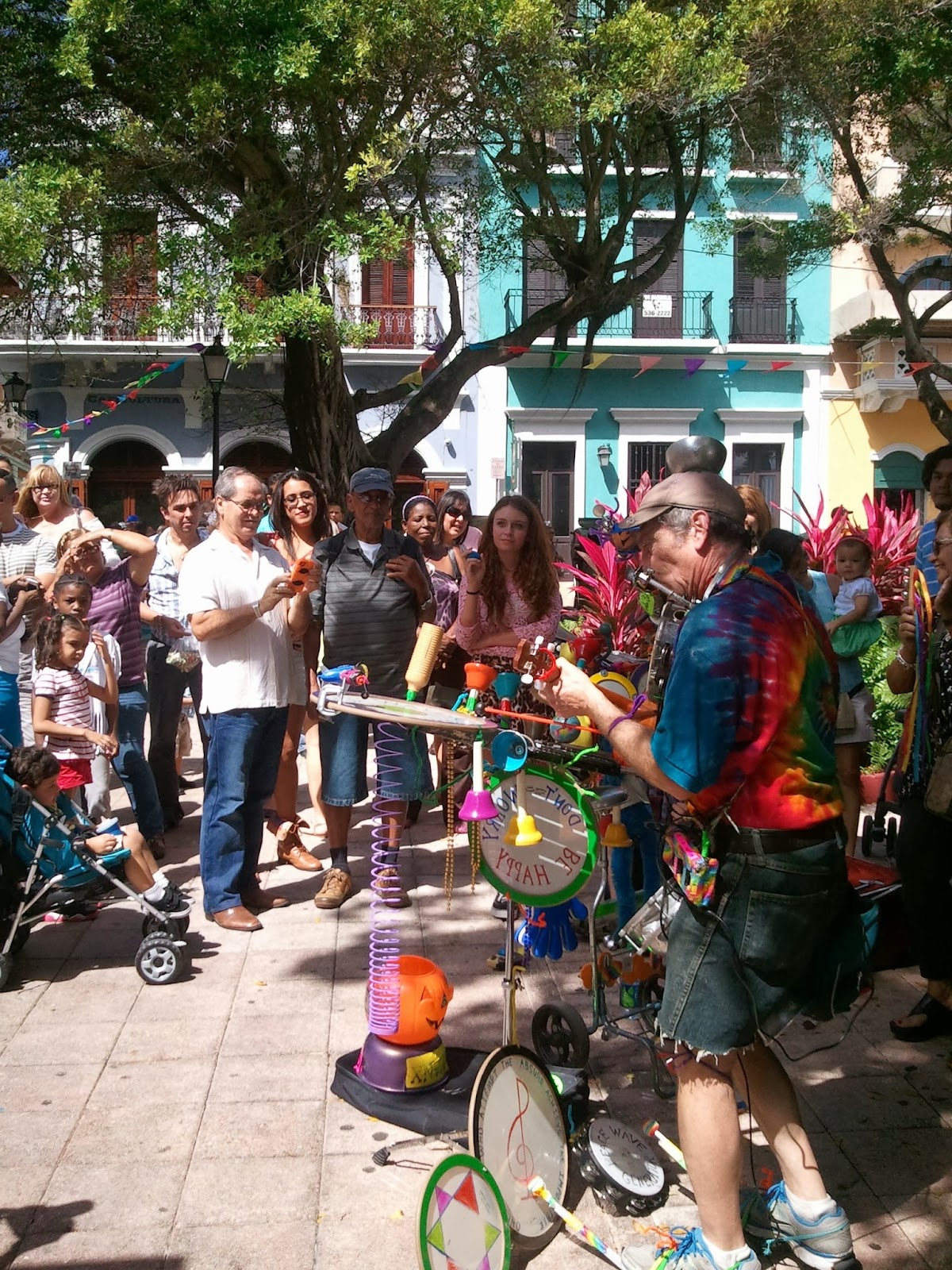