Happy New Year! Wow 2017 is almost here. Another year has gone by and what a crazy year it's been! Now more than ever the Professor World Band will be in demand to generate the Peace Waves that are so desperately needed. While there is still music there is always hope!

The big news for me since my last posting is that I've moved from the Cambridge Coop where I was lucky to live for the past eight years to a little red ranch house on the edge of a small town in the Berkshires in western Massachusetts. At this point it is uncertain if this move is only temporary or permanent. It sure is lovely out here though and peaceful. I've got deer and bear and fox and all kinds of critters right in my backyard.

Best of all though, I have my very own awesome basement workshop and practice room where I can make as much sound and music as I like whenever I feel like it. I've been doing a lot of practicing and I'm looking forward to doing lots more throughout the winter here and improving my show.
One of the first things I've been working on here in my basement is a brand new portable one man band. It is still fairly early in the developmental stage but I took it out for a test run in the Harvard T station a couple of weeks ago and I was quite pleased with the results. I am thinking about taking a trip with it to somewhere warm this winter.

It is a two hour drive from my new house to Boston though and not too many places to busk nearby. I often drive in to play and stay weekends in my van but will probably not do that so often after New Years until it starts warming up again. I'm expecting a pretty tough winter as we've already gotten a fair amount of snow. I am working on finding more gigs and places to play out in Western Mass. I played at the Asheville Fall Festival a couple of months back and that was fun. Last week I did a Channuka gig at Temple Israel in Greenfield that also went well. Let me know if anyones got any good ideas for me. I've been giving out my publicity at schools but haven't heard back from any yet.

I'm also working on my very own documentary film with the help of Greenfield Public TV. They leant me a camera to film and now they are teaching me to edit in their studio. It will hopefully be finished soon and then it will be aired on local TV and posted on the internet. I will post a link to it here on my site when it is ready.

That's about all my news that's fit to print for the moment. Here is one last photo of me playing in the Public Gardens in October with a couple of French horn players from a local music school. I thought we sounded really good together. 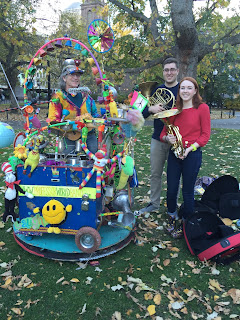 Happy 2017 to one and all from the Professor World Band! 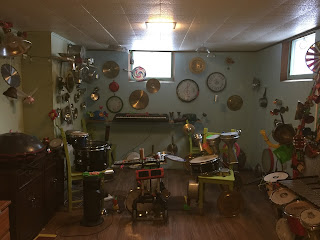 I am making a "Wall of Sound" down in my basement!
Posted by Professor World Band at 9:27 AM 9 comments