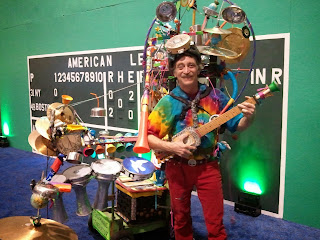 Here I am playing at the Seaport Convention Center 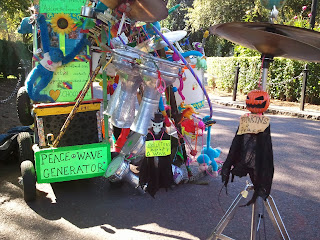 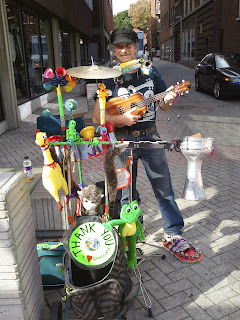 Greetings Professor World Fans! I'd like to invite you all to Professor World's 30'th birthday celebration  on Sunday November 17th in the Boston Public Gardens; most likely at my favorite spot there near the corner of Arlington and Boylston Street. Since Professor World made his first appearance in New Haven Connecticut on the day of my 30'th birthday, I will also be celebrating 60 years on the planet! I will be setting up some tables and I'll organize a Professor World Peace Wave Cake and drinks and treats. You are welcome to bring something to share if you like but most important is just show up and wish us well. ( Don't forget that I do love chocolate!) We'll sing Happy Birthday, blow out the candles and cut the cake about 2:00. I'm hoping for nice weather and sunshine but dress warm! In case of really inclement weather we will meet at the Bolocos on Charles and Boylston. A big thanks to Bolocos for offering also to supply some coffee and tea and snack age! I usually have my morning coffee there whenever I play in the Public Gardens because the people working there are all so friendly and they let me practice my awful Spanish on them.

It's been a really good fall thus far for the Professor World Band. The weather has been pretty good on weekends and it's lots easier to play when it's cooler. I had an awesome day yesterday in the Gardens because the pumpkin fest was going on on the Commons which brought hundreds and hundreds of kids in their Halloween costumes. A big thank you to whoever it was that dropped the $100 bill in my bucket! That doesn't happen very often and it sure is appreciated. Thanks as well to all who have contributed smiles and laughter and words of encouragement.

I've been working on a new "mini" Professor World Band Peace Wave Generator to do some traveling with in my 60'th year. I'll be playing drums and xylophone and ukelele and harmonica all at the same time. It's probably not quite as spectacular as my full size machine but it's a lot easier to transport and quicker to set up and break down and lots of fun to play. I will upload a beginning photo of it here but it is still in developmental phase. I'm really enjoying learning the ukelele. Next week I'll be flying to SanDiego with the new set-up to test out how it feels to travel with it. I'll be back just in time for my birthday celebration. I've been playing with it a few times now in Harvard and Porter Square and it seems to work quite well although it doesn't draw as much attention as the big machine. I'm still getting better at it and improving rapidly.

I'm posting another photo from a gig I did recently at the Seaport Convention Center for a medical research company. They wanted a baseball theme so I played in front of a fake Fenway park scoreboard and sang Take Me Out to the Ballgame. It was a bit of a fiasco because they had an Aerosmith cover band at one end of the hall and Oriental drummers with huge megadrums on the other. I was in the middles next to the brass band. So since I was getting paid to do it, I turned up the volume and blasted out my tunes. People did seem to enjoy it though despite the noise level.

I'm hoping for a mild winter so that I can go on playing my big one man band in the Public Gardens. I'm pretty hardcore so I'll be out there unless it's way below freezing and snowing. I do appreciate any indoor gigs I can get in winter though so keep me in mind for special occasions and give my card and website to teachers and tell them about my show. Some school gigs would be really nice. Kids love my show and find it very inspiring. Also when the weather is miserable it is nice to have the option to play in the T here in Boston with my smaller set-up.

Enough said for now. I hope to see you all at Professor World's 30'th birthday celebration!