It’s been a very intense and tragic week for Boston. There are difficult days ahead but at least in times like these we see that people do stick together and help each other out. I was very lucky. I passed by the finish line much earlier to check out the  busy scene there before setting up to play in the Public Gardens. It was a fairly sunny day but there was a bit of a breeze that made it actually a bit chilly. It’s great weather for playing one man band though because I move around a lot and stay warm. I was having a good day and lots of kids and their parents stopped by to join the band. I remember last year’s Boston Marathon was hot and humid and much more difficult to play.
I was taking a break and talking to the father of one of my biggest little fans when I heard a couple of distant rumbles; a bit like thunder. Although it wasn’t the weather for thunder, nobody seemed to react as if anything was amiss. Perhaps it was just distant enough so as not to be alarming. In any case, just before three I was getting ready to start the show when all the emergency vehicles started  passing by with sirens blazing and people came rushing through the park, many of them trying to get through on their cell phones. I asked someone what was up and they told me there were two explosions and many people hurt.  I decided it was time to pack up for the day.
I was lucky. None of my direct friends were physically injured but this is a small enough city and we are all connected. At least several of the victims have no doubt stopped to watch my show and possibly even joined the band for a song or two.
You can’t undo what’s already been done but now that the perpetrators of  this terrible crime are either dead or in custody, the healing can begin.
I was out in the Public Gardens with the Professor World Band this past weekend and we got a tremendous reception. It seems that the Peace Wave Generator is very much appreciated in times like these.
I continue to work on my show and to put my heart and soul into making it even better.  I am attracting many more new fans who continue to come out and help generate  Peace Waves on my weekly appearances in the Public Gardens. I am very thankful to them.
I am also thankful to Thomas Cooper, www.sutophotos.com, who sent me this photo he took of me in the Public Gardens shortly before the Boston Marathon. I’m thinking of using it for my next postcard. 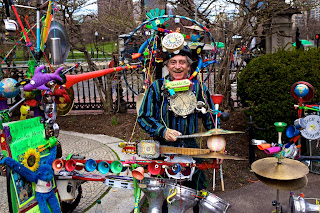 Posted by Professor World Band at 3:32 AM